Treviso is called ‘Little Venice’ because of the numerous rivers wind between its houses, creating beautiful views and an ambience that changes with each passing hour of the day.

From the Sile to the Buranelli, from Cagnan to the Roggia, the rivers have shaped the architecture of the city. One can see mills and mill wheels that have since been converted into charming homes, along its banks a reminder of the ‘farm’ that Treviso once was under the rule of the Serenissima Republic.

One of the most beautiful places in the city with its houses and buildings on the river. Here were women washed clothes up to 1900, as can be seen by the photographs. Today it is nice to walk along the riverbanks, under the portici and enjoy the particular atmosphere emanating from the city.

L’isola della Pescheria lies in the middle of the Cagnan river in the historical centre. It is connected to the mainland by two bridges. It has been a marketplace since the Middle Ages and the traditional fish market is still held in the shade of the chestnut trees.

There is a mill wheel, one of many that have been used to take advantage of the city’s waterways up until not so long ago.

Its present appearance is thanks to the architect Follina.

This Istra stone statue is a symbol of Treviso, the “joyful and loving” Marca. The statue was built in 1559, and with the annual election of a new mayor, the citizens were able to drink wine from the breasts of the statue for three consecutive days, a tradition which lasted until the fall of Serenissima Republic. Today, however, tourists can drink fresh water the statue.

The statue owes its name to the “Divine Comedy”. Dante Alighieri, who lived in Treviso, in the ninth verse of the Paradiso, spoke of a place ” where the Sile accompanies the Cagnan”. The bridge is in fact located at the confluence of the Sile and Cagnan, in one of the most beautiful and characteristic parts of the city.

Treviso is well known for its numerous buildings and houses that are decorated in this popular Medieval and Renaissance style. Despite heavy bombardments during the Second World War, one can still bear witness to unique frescoes adorning the houses of nobles and wealthy merchants by looking upwards whilst wandering through the streets.

Home of the “Benetton Foundation” (Treviso’s most celebrated company and cultural institution) where conferences as well as art and cultural exhibitions are regularly held.

This collection, which includes over 25,000 advertising posters ranging from the end of the 19th century to the 1950s is one of the most important Italian and European collections of its kind. It traces the story of the birth and development of commercial art, with works by Italian and foreign artists such as Dudovich, Hohenstein, Cambelotti, Codognato, Mauzan and Cappiello.

THE FIRST DEPICTION OF EYE GLASSES IN THE HISTORY OF ART

In 1352, at the Capitolo dei Domenicani seminary next to S. Nicolò church, the artist Tommaso da Modena painted a series of frescoes depicting illustrious Dominican monks all of whom, including cardinal Ugo di Provenza, wore “glasses”.

Works by Tommaso da Modena can be found in churches throughout the city. The circle “Storie di S. Orsola” in S. Caterina church is not to be missed. 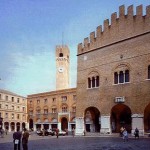 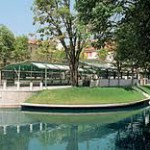